Darnet became our island home during our trip. I look at it now, from across the water in the Medway towns and I miss it.

A few photographs from my recent trip with Stephen Turner to the Medway Estuary. Day One we stopped off on Hoo Ness Island

Nothing happening – Oh what joy

The island has worked its magic, as islands often do. I stand at the gun emplacement window looking across the saltmarsh. I have been here how long? Half hour? Maybe more. Thinking of….nothing, just watching the sailing boats head out to sea and the terns fold their wings and dive for fish before emerging with a splash. The tide drifts in and, somewhere in the distance I can hear a cuckoo calling the hour away on Hoo Ness.

Outside, on the mainland I know it’s Friday. I can see real life carrying on. Lorries rush along the road to Grain, the never ending grind of sound from the building sites around Hoo St Werburgh can be heard across the water. In the Medway towns, people shop in face masks, drink lunchtime beer in pub gardens, race through office work so as to finish early for the weekend. It’s all out there and I know I must return but, just for now, I can stand at the window of my island fortress, doing nothing, peaced up to the nines. 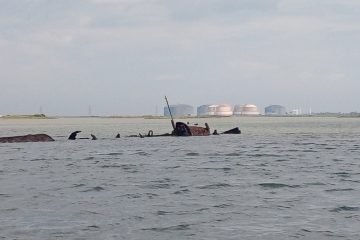 When heading out to the estuary don’t forget your death bag!

“Have you got a death bag?” asks my friend Syd from Medway Watersports when I phone her on Saturday night and ask advice on what I should pack for a week boating and camping on the Medway river.

Syd corrects herself, “Oh no, I forgot, they don’t call them that any more. They are called survival bags nowadays.”

However, it is too late, I am spooked. The list goes on: an anchor, first aid kit, spare paddles, VHF radio, distress flares!

The Medway river needs respects, as someone who has been rescued from a fast rising tide by a lifeboat, I know this better than most. The estuary is not a landscape to be messed with and I am grateful for Syd’s caution.

“I can supply charts,” Syd says and goes on to explain the numbering of bouys and the system of flashes which are unique to each.

It is then that I feel the rush of excitement. This river, this landscape, is a ten minute walk from my front door but somehow I feel as if I am setting forth on a grand adventure. Less than a week from today I will cast off in Magwitch along with Stephen Turner and head out with my charts, my anchor and, yes, my death bag, for an adventure that feels every bit as exciting as a journey to some far flung destination.

I will soon be returning to some of my favourite places along the length of the Medway Estuary which I first explored in 1994. This time I will be in company with the writer Carol Donaldson as we set off in our small inflatable boat ‘Magwitch’ to both cover old ground and to explore new places together. I have been looking at some of my older photographs to remind me of different moments during a long association with this special river. It’s been such a long and deep engagement that at times in the 1990s it felt more like a marriage! I have a lot of love still for all its natural and unnatural beauties; for the tides, terns and turnstones as as well as the recent recent history of cement and brick-making and power generation. Then there’s the legacy of hospital ships , quarantine vessels and prison hulks that even on a sunny day (to paraphrase Alan Silitoe in his book ‘The Saxon Shore Way’), still cast a their shadow across the marshes.

I will be looking forward to revisiting the twin forts of Hoo and Darnet in particular that were built to defend the Chatham Dockyard in the 1860s. Guarding port and starboard approaches to the deep water shipping lane, they were the Medway’s own Scylla and Charybdis* – designed to truly put any unwelcome ship between a rock and a hard place.

Unfortunately by the time they were completed in the 1870s traditional foes had become friends and naval technology had left their fixed gun casements on the verge of obscalescence. By the outbreak of the Second World War they had been abandoned, though Hoo Fort was recommissioned as an observation post. The earliest graffiti I found there was a large dot dot dot dash in white paint that possibly originated in 1945 with Churchill’s famous V for victory. A passing V formation of geese photographed on the same day was an equally happy counterpoint.

It’s exciting to be planning another trip and there is now only a few day to go..There are so many memories waiting to be unlocked and new associations formed.

* The sea monsters of Greek mythology that guarded the Straights of Messina.