Darnet became our island home during our trip. I look at it now, from across the water in the Medway towns and I miss it. 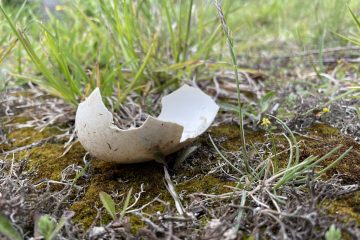 Nests in Peril on the Sea (and land)

I came close to crushing a clutch of herring gull eggs for the second time in eight years today, while Carol and I were exploring the perimeter of the fort on Darnet Island (The first time was on the Beaulieu River in 2013 when I was planning the live-work with nature project that became the Exbury Egg – www.exburyegg.me). I managed (both times) to step away, but I now can’t stop thinking again about the fragility of both these nesting sites and of nature in general, as we bestride the planet in our great size nines.

As sea levels rise and south east England slowly dips into the sea, the lower more remote parts of this and other nearby marshes frequently go under on high spring tides. It was particularly affecting to watch and hear the cries of over 200 pairs of gulls on Bishops Ness off to the east, as today’s flood tide washed through and over their nests. They settled down as the tide went out, but Carol’s more expert view than mine is that they will now have to start again. Yet there are high tides every month and the climate change we create will drive them higher.

Such is the pressure on these poor creatures that they are now nesting on the higher ground more frequently visited by people. What to do about the eggs we found today? They were still warm. Will the adults return? We kept finding more, ever closer to the fort itself and even upon it (we think the oyster catchers have colonised the roof). Should we even be here at all? We need to find a good and effective answer. 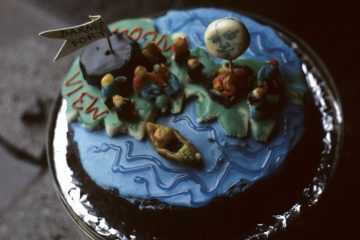 I couldn’t sleep more that a few winks last night as I was in thrall to the full moon once more; from its rising (a little blurry, unfocused and orange) to a shining ‘star’ brightening the heavens and touching the land and river with cool, clear light as it drew the tide in. With tide, the ships came as they always have. I remembered a drawing made on this very spot, of another full moon one cold December in 1997, when a coaster passed by with a festive tree attached to the foremast, full of sparkling coloured lists. Later, in September the following year, I invited a small group of people to join me to celebrate the full moon and was brought the gift of an amazing cake to mark the moment. Happy days… and nights. 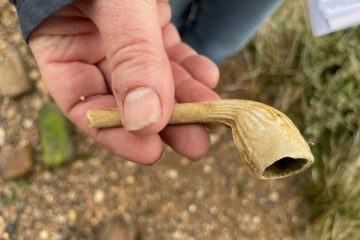 Carol was thrilled to find an almost complete clay pipe as we slowly combed the salt marsh, tuning in to the colours and shapes of the ground below our feet to identify anything out of the ordinary. I got a distinct second prize with a 19th century glass bottle stopper, but contented myself in the end, with a colourful collection of plastic rings – including bottle tops, ring pulls, pipes, washers, a pen and shotgun cartridge. It was good in this small fashion to help de-litter the foreshore and focus my mind on the conceptual circles and cycles of moon and tide which they interfere with and injure. We have now both got our souvenirs of times past and present.

In another 200 years will some future beachcomber pounce with relish on a rare sprite bottle cap in the same way we now love to find the waste and litter of yesteryear? Or will our hunger for petroleum based products so raise global temperatures that there will be no Medway marsh islands left to walk on at all, nor space for the already declining wildfowl to breed or roost.

I will soon be returning to some of my favourite places along the length of the Medway Estuary which I first explored in 1994. This time I will be in company with the writer Carol Donaldson as we set off in our small inflatable boat ‘Magwitch’ to both cover old ground and to explore new places together. I have been looking at some of my older photographs to remind me of different moments during a long association with this special river. It’s been such a long and deep engagement that at times in the 1990s it felt more like a marriage! I have a lot of love still for all its natural and unnatural beauties; for the tides, terns and turnstones as as well as the recent recent history of cement and brick-making and power generation. Then there’s the legacy of hospital ships , quarantine vessels and prison hulks that even on a sunny day (to paraphrase Alan Silitoe in his book ‘The Saxon Shore Way’), still cast a their shadow across the marshes.

I will be looking forward to revisiting the twin forts of Hoo and Darnet in particular that were built to defend the Chatham Dockyard in the 1860s. Guarding port and starboard approaches to the deep water shipping lane, they were the Medway’s own Scylla and Charybdis* – designed to truly put any unwelcome ship between a rock and a hard place.

Unfortunately by the time they were completed in the 1870s traditional foes had become friends and naval technology had left their fixed gun casements on the verge of obscalescence. By the outbreak of the Second World War they had been abandoned, though Hoo Fort was recommissioned as an observation post. The earliest graffiti I found there was a large dot dot dot dash in white paint that possibly originated in 1945 with Churchill’s famous V for victory. A passing V formation of geese photographed on the same day was an equally happy counterpoint.

It’s exciting to be planning another trip and there is now only a few day to go..There are so many memories waiting to be unlocked and new associations formed.

* The sea monsters of Greek mythology that guarded the Straights of Messina.